A Discovery Centre is a place where you can stop in along the trail and learn about the wonders of the Niagara Escarpment World Biosphere Reserve. Our main Discovery Centre in the Dundas Valley Conservation Area closed operations in 2017, but some of the educational displays remain. A collaborative centre can be found at Inglis Falls in Owen Sound, and interpretive panels at Cabot Head (closed until 2019). Before the organisation’s closure, we were working hard to expand to a network of Centres all along the Escarpment in Ontario. You can learn more about where the Discovery Centre Came from and its history by visiting these links: 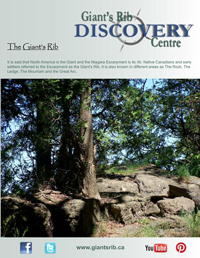 Your visit to the Centre will include interpretive display panels with many interesting facts and images relating to the Niagara Escarpment and fossils on display more than 400 million years old…twice as old as the dinosaurs!

So enhance your walk along the Bruce Trail, your visit to a waterfall or grotto or cave or cliff with a visit to a Discovery Centre! 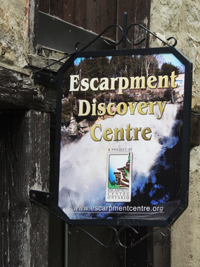 In 2015 the Dundas Discovery Centre got a makeover and we’re now happy to say that the Owen Sound Centre got one too! New interpretive panels and displays are now installed, fossils from the Escarpment can be viewed and materials from the study of ancient cedars are also on display, with more enhancements on the way in.