In the 1990’s, when the Giant’s Rib Discovery Centre  was only a concept, another Centre was being planned for Inglis Falls in Owen Sound. Much like the fate of the Centre in Hamilton, the Centre in Owen Sound was never constructed. 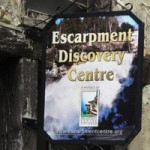 In 2015 the Dundas Discovery Centre got a makeover and we’re now happy to say that the Owen Sound Centre is getting one too! New interpretive panels and displays are now installed and more enhancements are on the way in 2016.

Stay tuned for more updates as new displays are installed.