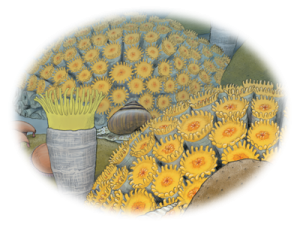 The ancient shallow seas which covered these lands more than 440 million years ago were filled with coral reefs of many shapes and sizes including pinnacle reefs, barrier reefs and patch reefs. Coral reefs made their first appearance on the planet during this time (Silurian Period 443 to 416 million years ago). These reefs assisted in the development of other species, providing food for some of the first fishes which were beginning to appear in the oceans.

While there were many species of corals, we can generally group them into a few categories.

Bryzoans are colonial animals that live in both freshwater and seawater. A colony is composed of hundreds of very tiny individuals, each of which has a special organ that filters small food particles from the water. Bryozoan colonies are attached to the seafloor or to other organisms. At least 7 species of bryzoa existed during the Silurian period and many species still exist today.

Rugosa are an extinct order of coral that were abundant in the ancient seas. They are also referred to as horn corals because of a unique horn-shaped chamber which supported a single animal, similar to the modern sea anemone. Some solitary rugosans reach nearly a metre in length. Some species of rugose corals were not solitary and could form large colonies. Rugose corals have a skeleton made of calcite that is often fossilized.

Tabulate Corals were tube-shaped corals like a series of joined organs or pan pipes looking much like a honeycomb. These corals once numbered around 300 species but are now also extinct.

Bryzoan corals on display at the Discovery Centre 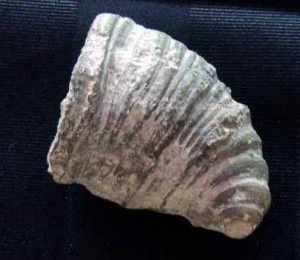 Rugosa (horn) coral on display at the Discovery Centre 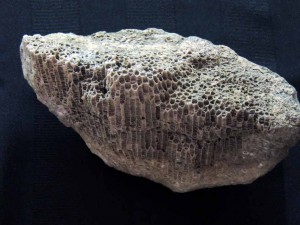 Tabulate coral on display at the Discovery Centre