Formation of the Escarpment 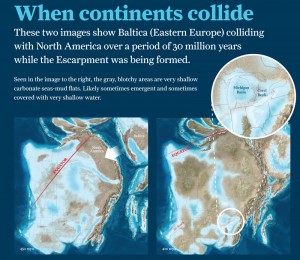 Approximately 450 million years ago, the area was covered in an ancient shallow sea just south of the Equator. This shallow sea covered most of North America. Locally the sea was a pooled in a depression we call the Michigan Basin. The seas were full of early life which lived on the muddy bottom and coral reefs in the shallows. As these early creatures died, their bodies settled to the bottom of the sea.

Dirt and mud and sand we call “sediment” would be washed into the sea and cover the remains of these creatures. This sediment came from the mountains to the east as time and weather wore them down.

Most of the sediment settled in deltas and reefs around the rim of the Michigan basin, depositing various colours of clay and sand.

Over time, these layers of deposited sediments and remains were compressed and turned to rock. We call this “sedimentary” rock. Mud and silt would form layers of shale; sand into sandstone; and corals, calcium-rich exoskeletons and lime mud into limestone. The remains of the many species of sea creatures became fossils within the layers of sediment.

A chemical reaction between calcium carbonate (lime) of the reefs and shells, and liquid magnesium over a long period of time created a hard, resistant layer of magnesium-calcium carbonate known as dolomite (dolostone).

The erosive forces of water and wind thinned the dolomite cap rock and eroded the softer rock layers beneath forming a small ridge of exposed rock, along the edge of the dry seabed of the Michigan Basin.

This left behind a ridge, a vertical face of exposed rock, creating the Escarpment cliffs. The most recent shaping of the Niagara Escarpment occurred with the end of the last ice age, around 10,000 years ago.

Check out the new interpretive panel as it appears at the Centre. 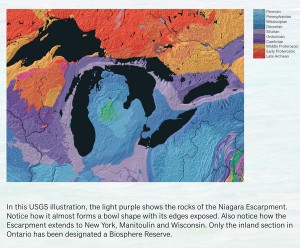 learn how the escarpment was shaped into what we see today