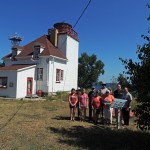 at the Cabot Head Provincial Nature Reserve and Light station.  The Giant’s Rib Escarpment Education Network (GREEN) and the Friends of Cabot Head (FOCH) worked together to provide more information to visitors about the Niagara Escarpment World Biosphere.

The first panel was placed near the lighthouse highlighting some of the important species home to the escarpment in that area. The second panel was placed in the Wingfield Basin, focusing on the UNESCO Biosphere Reserve designation and its importance, along with some interesting facts about the Basin and local escarpment features. The third panel talks about the origins of the Niagara Escarpment as a fossilized ancient sea bed and the creatures living within.

In fact, the area surrounding the fossil panel is rich with fossils nearly half a billion years old! There are two very good specimens of straight-shelled cephalopods (nautiloids) just a few metres away from the panel!

In 2013, GREEN embarked on a project to revamp all of the display materials in its Discovery Centre in the Dundas Valley: to take all the available information and present it in an easy-to-read and understand format. The new interpretive panels and Centre resources could then be duplicated anywhere, providing consistent and information along the Escarpment. 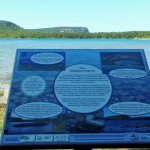 The panel talking about the biosphere affords an awesome view!

elsewhere along the Giant’s Rib where interpretive information was needed.

The Cabot Head Lighthouse was one such location. In looking at establishing a “centre”, however, FOCH and GREEN didn’t want to change the ambiance of the lighthouse and decided it would be best to place the interpretive panels along the trails. This way, visitors can experience the wonders of the Niagara Escarpment first hand while learning about it as well.

Pictures and a short video of the new panels and the Niagara Escarpment near Cabot Head are posted on the website and social media channels.

Additionally, GREEN has collaborated with Grey Sauble Conservation Authority to put interpretive information into the Escarpment Discovery Centre at Inglis Falls in Owen Sound. Ongoing efforts will see more enhancements to their Escarpment displays in the near future. More on that initiative may be found here.

With great thanks to the volunteers of GREEN and FOCH, our private donors, TD Friends of the Environment Foundation, Friends of the Greenbelt Foundation and the Ontario Trillium Foundation, GREEN has been able to reach out all along the Giant’s Rib with interpretive information about the Niagara Escarpment World Biosphere. We look forward to bringing our resources to new and exciting locations all along the Rib!