The History of the Giant’s Rib Discovery Centre

In 1995 the Province of Ontario, City of Hamilton and the Hamilton Region Conservation Authority entered into a partnership to plan and develop a Niagara Escarpment World Biosphere Reserve Interpretive Centre in Hamilton-Wentworth, Ontario. It was intended to position Hamilton-Wentworth as the Urban Gateway to the Niagara Escarpment World Biosphere Reserve. 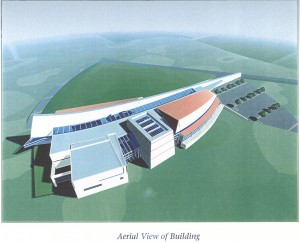 The province of Ontario had allotted $3million in 1995-96 for environmental projects associated with the Red Hill Creek watershed on the east side of the Region of Hamilton-Wentworth. The Hamilton Region Conservation Authority was designated as the body to manage the distribution of these funds among selected environmental projects. One of the projects was the planning of the Niagara Escarpment World Biosphere Reserve Interpretive Centre in 1996. A special advisory committee was established, composed of City of Hamilton staff and elected officials, representatives from the Provincial government, representatives from the Hamilton-Wentworth Conservation Authority, representatives from the Niagara Escarpment Commission staff and a cross section of citizens selected from various environmental organizations with strong interests in preserving the Niagara Escarpment. Kenneth Hall, a representative from the Hamilton Naturalist Club, was elected as Chair and Bruce Duncan, the project coordinator, from the Hamilton-Wentworth Conservation Authority was appointed secretary-treasurer. Heritage planning consultants, Verburg and Associates of Pickering were hired to research and determine the concept, financing, marketing and site feasibility for the proposed Centre. Their work resulted in an interpretive/business plan that formed the basis for the detailed storyline, exhibit and architectural design. 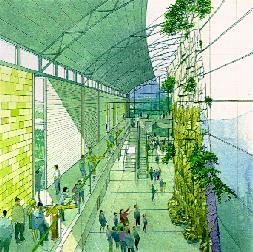 The capital costs of the Centre had been estimated in 1995 dollars as $6,000,000. The provincial government had indicated that they would fund the building costs if the site were located somewhere in Hamilton-Wentworth, possibly near the Red Hill Valley. However with a change in government all funding for the project was frozen and the commitments were eventually withdrawn.

With the collapse in provincial funding, provincial and municipal representatives withdrew from the advisory committee leaving only the environmental citizens, Bruce Duncan from the Hamilton Region Conservation Authority staff, and the Niagara Escarpment Commission representative, Anne Redish, to carry on with the development of the dream.

The committee carefully appraised 45 sites within Hamilton-Wentworth and eventually a gifted offer, the abandoned Sheppards Quarry on the Escarpment, close to the junction of Highways 5 & 6 was selected as the future site of the Niagara Escarpment, World Biosphere Reserve Interpretive Centre. Fortunately, grants became available through financial assistance from the City of Hamilton, (who also provided office space in the Flamborough Municipal Offices) the Ontario Trillium Foundation, the Ontario Ministry of Tourism and the Town of Waterdown. The basically citizens group formed an 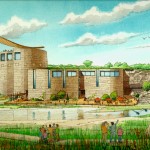 association and was incorporated in April 1999 under the name ‘ The Giant’s Rib Discovery Centre’ (GRDC).

Over the next few years some programming was initiated, such as Earth Day events, Elderhostel hosting, art shows and lecture series. However most of the Directors’ energy was expended in planning for the Centre at the Quarry site. Unfortunately these efforts were eventually abandoned when the total tract on which the quarry stood was sold and a satisfactory agreement could not be made with the owners for the quarry lands. The new developers wanted to use the land between the Quarry and Highway 5 for a major box store centre and requested that the GRDC now purchase the quarry lands and build their own road to it from the highway. This additional financial commitment was too much for the financially strapped organization to overcome and it appeared that the GRDC project would collapse.

The Hamilton Conservation Authority came to the rescue by offering the GRDC shared space to operate at the Dundas Valley Trail Centre. This was one of the sites listed on the earlier short list and has many ideal features. Located among a Carolinian forest in the naturally protected glaciated Dundas Valley it is at the crossroads of two of Canada most significant trails, the Niagara Escarpment Bruce Trail and the Trans Canada Trail.

Since 2006, from its new location, the GRDC has been able to initiate its programming by distributing materials related to the Dundas Valley and other parts of the Niagara Escarpment to Trail Centre visitors. Regular monthly lectures are offered by experts on natural and cultural topics related to the Niagara Escarpment and artists and photographers are invited to display environmental works on weekends throughout the year. The GRDC also issues a monthly newsletter to over 350 Friends of the Giant’s Rib, operates a web-site and produces educational materials based on the Niagara Escarpment, suitable for use in Ontario schools. A resource library exists at the Trail Centre and a vast array of research materials are offered on the GRDC web-site.

Richard Murzin, President of the Canadian Biosphere Reserves Association (CBRA), announced on Thursday, June 21, 2007 that the Giant’s Rib Discovery Centre (GRDC) has been recognized as a local biosphere committee for the Niagara Escarpment Biosphere Reserve.

The Association considers that the Giant’s Rib is already fulfilling many activities for the Niagara Escarpment, which reflect the Escarpment’s designation as a UNESCO World Biosphere Reserve. They are pleased to acknowledge this and to thank the GRDC for their support for research, education, training and encouragement for sustainable development related to the Niagara Escarpment.

A biosphere reserve draws its strength from active involvement and cooperation within a community of interest. The GRDC is exemplary in this regard and the Niagara Escarpment Biosphere Reserve is honoured to recognize the Giant’s Rib Discovery Centre as a biosphere committee.