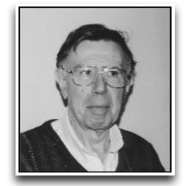 Ken Hall is an award winning environmentalist, and a founding member of the Giant’s Rib Discovery Centre.

When we think of today’s escarpment heroes, right away names like Ray Lowes and Sarah Harmer come to mind. Yet there are unsung heroes among us; women and men who work tirelessly to preserve and protect our Niagara Escarpment, and Ken Hall is one of those visionaries. Since his retirement in 1989 Ken has devoted his time to educating the public about our environment and the Niagara Escarpment World Biosphere Reserve.

Ken worked as a teacher and principal in both the elementary and secondary school systems. After retiring he was a primary player and driving force in the formation of Hamilton’s Bay Area Restoration Council, played a key role with the Hamilton Naturalists Club in the Hamilton Harbour Remedial Action Plan, and was a member of the Fish and Wildlife Habitation Restoration Committee that built the fishway into Cootes Paradise. He served on the Ontario Trillium Foundation, the TD Friends of the Environment Foundation and with the Dundas Rotary Club since 1997, was Environmentalist of the Year and performed volunteer work in Mexico, Gaza and Nepal.
In 1996, 6 years after the Niagara Escarpment was declared a World Biosphere Reserve by UNESCO ,we first heard the words” Niagara Escarpment World Biosphere Reserve Interpretive Centre” and Ken had another project to sink his teeth into. The project was the Hamilton area’s response to the Biosphere designation and a vision to recognize the significance of the Escarpment, its life systems, and bring that information to the public. With Hamilton as the largest municipality on the Escarpment, this was to be the “Urban Gateway to the Niagara Escarpment World Biosphere Reserve”.

Ken Hall jumped in with both feet. In the early years he served as chair of this committee and helped to secure funding, enlist assistance and volunteers, and to find a suitable location for the Centre. With reference to a First Nations name for the Escarpment, the project became the Giant’s Rib Discovery Centre (GRDC).
For 10 years Ken worked tirelessly on this vision even when the bottom fell out. When funding disappeared and other complications tabled the larger project, Ken Hall kept the vision alive, leading his volunteers and working with the Hamilton Conservation Authority to finally open a small Centre in the Dundas Valley Conservation Area in 2006. Working with dedicated volunteers and educators, interpretive displays were developed, an escarpment library was established and public education programs were developed. A monthly lecture series, a monthly Arts and Photography Show, guided interpretive hikes and a curriculum teacher’s kit were all designed for one reason: to let people know about this magnificent natural treasure we have in the Niagara Escarpment.

Ken’s commitment to communicating the Biosphere to the public, and his talent for inspiring others to volunteer kept this vision alive. What’s more Ken can always be found getting his feet wet and hands dirty making it happen. Up until 2012, Ken was the program co-ordinator for the lecture series, the Arts series, education programs, hike programs, book review program, volunteer coordinator, Discovery Centre volunteer usually 2 or 3 weekends a month, and, if that wasn’t enough, served as President.

“When I see the pleasure people get while on the walking trails, you know you had something to do with that. In teaching, it’s the people who come back to me years later to say thanks. It’s those little perks that keep me going,” says Ken.

At the spry young age of 84, Ken continues to play a key role in all aspects of the GRDC programs including handling volunteer shifts at the Centre, and writing the newsletter’s Teacher’s Corner. With a renewed cast of volunteers, Ken’s vision of educating the public on the Biosphere Reserve continues into the future with plans for upgrades to the centre and the website, development of new educational resources, and expansion of education programs and outreach beyond Hamilton to the entire length of “The Giant’s Rib.”