The Southern Ontario landscape we see today was shaped most recently by the recession of the Wisconsin Glacier.

Imagine our local landscape covered in a sheet of ice two kilometres high!

Imagine the weight of that ice! Now imagine that ice moving slowly along the landscape.

As the glacier receded, it scraped away everything in its path, laying the landscape bare to the bedrock. It would push (or pull) top soils and softer sedimentary rock along its path of movement. We call this “glacial till”.

Occasionally the weight of the glacial till would become too heavy and would deposit itself in a “moraine” or a “drumlin”. 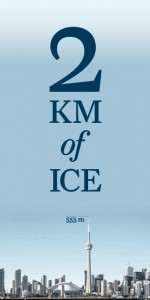 These words describe areas covered in glacial till. The most significant moraine in Ontario is the Oak Ridges Moraine, covering 1900 square kilometres between Caledon and Rice Lake.

Locally, in the Flamborough area, the tall rolling hills are actually drumlins… hills made of glacial till too heavy to move any further. The Copetown Bog was formed from a section of glacier which broke off, formed a depression and filled with glacial melt. The Dundas Valley also contains glacial till.

The massive amounts of water created by the melting glacier also helped shape our landscape. Muds, clays and sands were washed into deltas at the edge of Glacial Lake Iroquois, the “ancestor” of Lake Ontario. Drainage to the sea through the St. Lawrence was blocked for some time, making Lake Iroquois much larger than present day Lake Ontario. Once the blockage cleared, lake levels dropped.

Did You Know?
The Niagara Escarpment was actually formed during an ice age, but because it was located below the equator at the time, it was in a tropical climate.

Massive rivers flowed across the land carrying glacial meltwaters. Those rivers which crossed the Escarpment carved out massive gorges and ravines over the next 10,000 years. You can see this erosion of soft rock in the Niagara Gorge, The Spencer Gorge, The Beaver Valley and many other locations along the Giant’s Rib. Find a fairly large waterfall and you will also find a gorge carved out by glacial melt.

At one time lake levels were higher than they are today and the escarpment was a shoreline, with waters carving out caves and potholes and even “flowerpots”! At another time, lake levels were lower than present day. Below the clear blue waters of Georgian Bay we find the remnants of old forests!

Click this blue thing to learn more about glaciation and stuff