The Earth is incredibly old. In fact, the estimates are that our planet is over 4.5 billion years of age. Over such a long period of time, the Earth has changed and been shaped by many different processes, one of which is ice. Since the beginnings of the Earth, there have been approximately 5 major ice ages on this planet. They are called the Huronian, Cryogenian, Andean-Saharan, Karoo Ice Age, and the Quaternary Glaciation. Of those five, the most severe ice age, the Cryogenian, saw ice extend from the poles all the way to the Equator.

As humans today, we are in fact living in an ice age. Despite the apparent lack of ice, each ice age has what are called Glacial Periods, where the ice advances throughout the planet and retreats back to the poles. The last glacial period ended approximately 10,000 years ago and we are in what is called an Interglacial, a period between widespread coverage of ice. 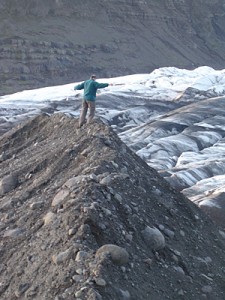 The Wisconsin Glaciation dramatically altered the landscape in almost all of Canada and the North Eastern United States.  In particular, the Escarpment was covered by ice about 2km thick. In particular, the Dundas and Beaver Valleys were shaped by an ice sheet moving westward from Lake Ontario. When the ice was retreating, near the end of the glacial period, large amounts of sediment were left behind. This sediment could range anywhere between large boulders to fine particles, ground and crushed by the large bodies of ice. Often times, Moraines were created when large rocks were deposited. Moraines are ridges of rock that can extend 20 metres above the landscape and are usually created when rocks are deposited at the margins of a glacier. Along with rocks and boulders, melt water played a large role in shaping the Escarpment.

As the ice melted and retreated northwards, the remaining water rushed across the escarpment, changing and shaping the landscape to its desire. In fact, Niagara Falls is the result of a massive gorge eroded by a surge of melt water from the major ice sheets. Throughout the length of the Escarpment, evidence of the Wisconsin Glacial Period can be seen, even today. Further water erosion in the forms of lakes, rivers, and creeks has deposited sediment all along the Escarpment. Outwash Plains are the results of rivers extending from large lakes and depositing sand and gravel along plains in Southern Ontario. When the glaciers retreated, they left enormous amounts of water in the form of great lakes. Those lakes are not exactly those as we know them today, although similar. 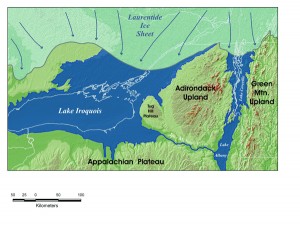 The four major lakes which came into existence with the retreat of the Wisconsin Glacier retreated were Lake Algonquin – with an area including Lake Superior, Lake Huron, and Lake Michigan, Lake Warren – which was a smaller Lake Erie, Lake Iroquois – a larger Lake Ontario, and Lake Tonawanda – an area of Western New York State. The accompanying image shows how big these pre-historic lakes were compared to the present day counterparts. Lake Tonawanda is the small body of water between Lakes Iroquois and Erie.

Glaciers are, in reality, huge masses of ice stretching kilometres high and thousands of kilometres across. With so much ice, they are bound to be very heavy. Ice sheets like the Wisconsin glacier are so heavy that they depress the landscape, pushing the earth down.

The reason these four great lakes changed over time was due to the land rising up as part of the “glacial rebound”. This cut off several channels of water that were connected to these great lakes including Lake Huron to Lake Ontario, Lake Huron to the Ottawa Valley, and Lake Ontario to the Hudson River in New York.

These changes in water and land levels had a profound impact on the surrounding landscape and were instrumental in shaping the Niagara Escarpment that we see today. A complex process of moving rock, water, and ice almost 10,000 years ago formed the valleys, gorges, waterfalls, lakes, and rivers which make the escarpment so unique and truly paint the picture of a Giant’s Rib across Canada and the United States.

Researched and written by Mark Williamson.