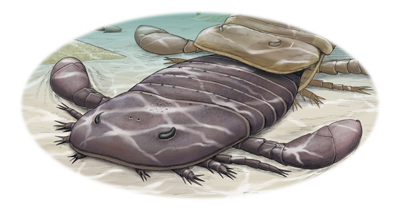 Eurypterids , or Giant Sea Scorpions, were a type of Arthropod, or creature with its skeleton on the outside (exoskeleton) with a segmented body and jointed limbs. Eurypterids, or Giant Sea Scorpions, appeared on the scene about 460 million years ago. They were one of the Earth’s first large predators. It is believed that these were one of the first animals to venture up on land. Smaller arthropods lived in the ancient seas from around 540 million years ago and included smaller creatures like trilobites and crustaceans.

Anatomy of a Sea Scorpion

Most eurypterids probably preyed on other eurypterids or fishes and some may have been the dominant macropredator of the time. There were approximately 15 species of Giant Sea Scorpions. Some eurypterids exceeded a meter in length, making them the largest arthropods.

Fossil records have been found only in two parts of the world; Eastern Europe and North America near the Niagara Escarpment. Their closest modern-day relative is the horseshoe crab, with similarities as well to arachnids (spiders) and today’s scorpions.

The fossil you see here is on permanent display at the Centre. Eurypterus remipes, was the most common of the species and is the State Fossil of New York. This fossil came from a section of the Bertie Lime formation in New York State, formed  417 million years ago. Back then, that area was a shallow lagoon thought to be a breeding ground for the species. Giant Sea Scorpion habitat consisted of shallow waters where food sources would be plentiful. 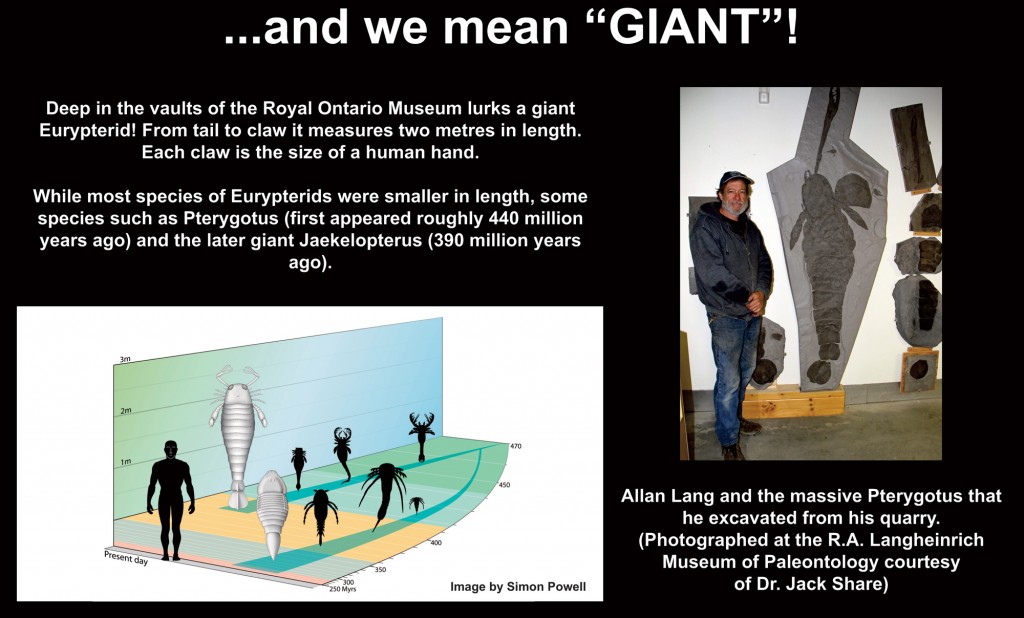 The University of Maryland has an awesome page on all sorts of eurypterids. Check it out here: https://www.geol.umd.edu/~jmerck/bsci392/lecture25/lecture25.html