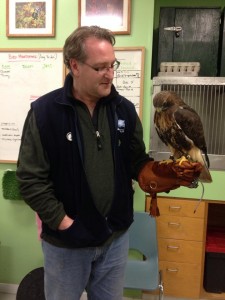 Chris Hamilton grew up in Burlington and discovered the wonders of the Niagara Escarpment on a trip to Mount Nemo when he was thirteen. He returned many times in the following years as a camp counsellor for the City of Burlington at Lowville Park.

Near the end of a twenty year career in the auto transportation industry, Chris returned to his roots and began hiking the Niagara Escarpment in local conservation areas, picking up photography as a hobby. When he left the auto industry he spent a season at Mount Nemo photographing and studying Turkey Vultures in their natural habitat. During that period he compiled a photographic library of natural and wildlife shots taken in the region’s conservation areas along the Niagara Escarpment.

He also published and promoted The Cookbook for Men Whose Wives Don’t Cook, a humorous look at learning the culinary arts. In 2007 he began work for the Hamilton Conservation Authority as Information Officer. It was there he found the Giant’s Rib Discovery Centre. He was a featured artist for the Weekend Arts and Photography Series at the Centre twice, and was a guest speaker at the Bruce Duncan Memorial Lecture Series presenting on the year he spent with the Vultures of Mount Nemo. Currently Chris speaks across Ontario to groups interested in learning about these unique birds and is considered an expert on the subject. His article on vultures in Escarpment Views magazine was one of the most popular issues ever.

During this time, Chris learned about the GRDC, its history, its vision, and the original concept plan to develop a one-of-a-kind education/interpretive centre for the Niagara Escarpment. With great respect for the efforts and vision of founding members Bruce Duncan and Ken Hall, and with gratitude for the opportunities the GRDC had provided, Chris joined the GRDC Board as Outreach Coordinator in November of 2011. He was elected President at the Annual General Meeting in November of 2012.

Chris still believes in the need for an interpretive centre for the Niagara Escarpment World Biosphere Reserve and the importance of the GRDC’s public programs to ensure the continued protection of this amazing natural area. You can also find him on Sundays volunteering at the Mountsberg Raptor Centre.

As the newly elected President of the Giant’s Rib Discovery Centre I’ve found myself with some big shoes to fill. The GRDC has a rich 15 year history written by dedicated volunteers from all walks of life. School teachers and principals, environmentalists, conservationists, doctors, lawyers, students and more all have given their time and their energy for one cause: to tell the story of the Niagara Escarpment World Biosphere Reserve. It is our hope that by educating the public on the wonders of the “Giant’s Rib” we ensure its protection in the future.

A multi-million dollar dream of a one-of-a-kind interpretive centre was stalled soon after its inception (see GRDC History) but dedicated volunteers kept the concept alive through public programming and the development of curriculum kits for schools. I would be remiss if I did not recognize the efforts of all those who have come before me, and especially recognize past President Ken Hall who has kept the torch alive for so long and has shouldered much of the workload himself. Joan Hall must also be recognized since we all know Ken couldn’t have done it without her. (Thanks for the cookies, Joan!)

So thank you to Ken (and Joan) for all they have given. And thank you to all who have served on the Board or as a volunteer during the last 15 years.

We also need to recognize the Hamilton Conservation Authority, HCA staff, the staff at the Dundas Valley Conservation Area, and Bruce Mackenzie for unfailing support of the GRDC and its programs. They have provided us with a home since the early 2000’s and we could not operate effectively without them.

Moving forward I see opportunities to make the original vision come true. With so many community groups involved in protecting the Niagara Escarpment, and with the current erosion of our provincial and federal environmental laws it is becoming more and more important for groups like ours to network our efforts: not only to protect the Niagara Escarpment, but to educate and enlighten. You can help us by sharing our online resources, volunteering or simply by spreading the word.

In the coming years we hope to improve and expand our operations at the Discovery Centre, grow our public programs, and one day realize the dream of creating a Centre dedicated to learning and experiencing the wonders of the Niagara Escarpment World Biosphere Reserve.